Followers - Thanks for showing me love :)

Saturday 24th, the week of my birthday which was on Thursday 22nd (so I'm 26 now)... was the day I had slapped in a quick beauty shoot with a photographer friend and one very gorgeous model.

Never really been a fan of Napoleon Perdis Cosmetics.  Out of their whole range I probably only like 4 cosmetics in their range.

However since the Makeup school I studied at uses all Napoleon Perdis product (which in a good way is great for students, at least there is still a decent cosmetics range to use and learn from), I've become quite familiar with their products and that I have a love-hate sort of feeling with it.  I think it is the same with every brand, but there was so much I didn't like and the fact that 2 of their foundations had given an allergy reaction seriously put me on the down side.

Anyway today I'm here to share some swatches of the lip liners that I own.  I did not pay for these lip pencils as I was awarded top student in my class, so as an award I got a gift voucher to spend on Napoleon Perdis makeup.  Lip liners were only some of the things I got from the range and at that time of purchase I was seriously lacking in them too.

Here are the sleek looking pencils with a nice gold cap.  It looks a little more classy, in a way that is and very Napoleon Perdis style. 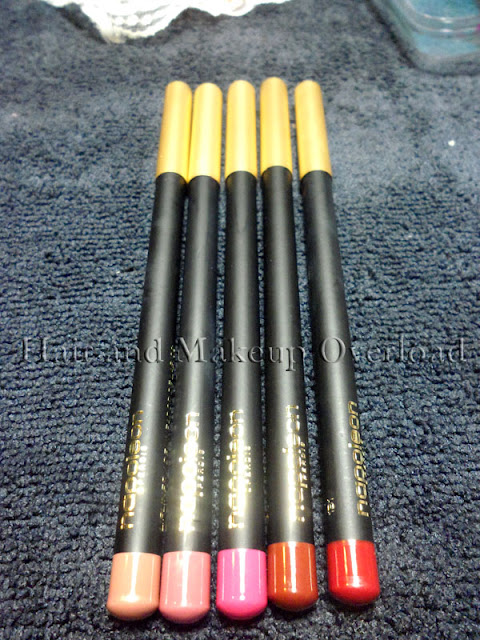 What's going on in my life?

Thank you for all your support regardless how tardy I haven't been with updating this blog.  I guess life is catching up on me especially with work and then trying to put in all my effort to actually create a background/career for myself in the makeup artist industry.  It's definitely not easy and I'm seriously giving it my all to try and make things happen.

So thank you to all those who had left me encouraging/concerning emails.  I've felt so happy and blessed after reading them all.

Here I am today with a day off work because I've gotten so tired and sick that I was not allowed to come in.  Never have that ever happened in my whole working life.  I used to go to work even if I was unwell.

I've been doing photoshoots to help build up my portfolio and to network so I can meet more photographers, models, and stylists who are also in the industry.  It's been great fun working with new talents creating makeup to go with a shoot, but also very tiring as I feel I don't really have any free day to actually just sit down and take a nice long break.

I've also been busy building up my new website just for my makeup artistry and even though it's kind of empty and still under construction you can still check it out here:

For any business or general enquiries please contact me via email:

Promote your Page too